Mood Music: Singing, playing, or simply listening can be a powerful, healing force

Posted at 17:33h in In the Media by jpalmieri 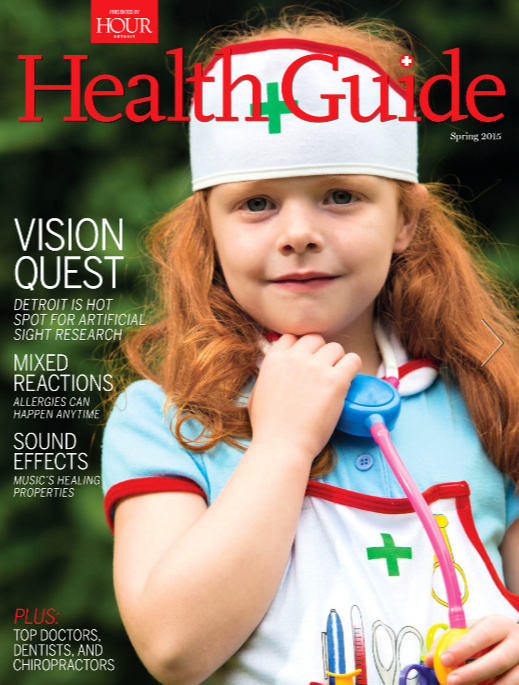 Most of us can readily attest to the mood-altering effects of music: A soothing Beethoven string quartet melting away the rigors of a rough day, an exhilarating Art Tatum piano jazz riff raising you up from the doldrums, a pop song from your youth bringing back a cascade of feel-good sentiments.

So it stands to reason that a more prolonged and structured approach using music as a healing force can work wonders on the body and the mind. That’s the aim of music therapy, and it’s little wonder it’s been employed to treat such diverse challenges as autism, dementia, aphasia, physical pain, depression, and socialization skills in hospitals, schools, nursing homes, psychiatric facilities, and other settings.

But music therapy involves a lot more than slapping on a pair of earbuds and listening to favorite tunes or strumming a guitar to hush a roomful of unruly kids. Therapy is tailored to particular disabilities or diseases; it’s not a onesize-fits-all treatment. It can be used with individuals or in group settings, and ranges in treatment from infants to the elderly.

Therapists are trained in music, medicine, and psychology. A bachelor’s degree is the minimal requirement, including 1,200 hours of clinical work, but many therapists have advanced degrees in either music therapy or related disciplines. And therapists have to have solid training in music, not just an ability to pick out a few chords on the piano or guitar.

“We emphasize with students that the quality of the therapy is directly related to the quality of the music,” says Jody Conradi Stark, site director for Music Therapy Clinical Services at the MSU Community Music School-Detroit, and a music therapy professor at Eastern Michigan University in Ypsilanti.

“There needs to be a high level of proficiency on whatever instrument therapists may choose,” says Stark, who holds a Ph.D. in music education (with a music therapy cognate) and who works with all manner of clients, from preschoolers to the elderly. She also works with visiting groups, such as the Greater Detroit Agency for the Blind and Visually Impaired.

Awareness that music can have a therapeutic effect has been around for centuries, but it wasn’t until 1944 that Michigan State University (MSU) became the first in the nation to offer a music therapy program. Many universities followed suit, although MSU no longer offers degrees in that discipline.

The case for music therapy sounds persuasive in theory, but how would it work, say, in managing pain?

“What happens is that music can serve as a distraction,” Stark explains. “It’s like an athlete who plays through the pain and doesn’t know until after the game the injury is more serious. Before the pain gets to a certain level of severity, there is a way that music can distract you from that pain and reduce the need for pain medication.”

Music can also be employed to treat autism, Stark says, citing an example of a boy who used echolaliac speech, meaning he would merely repeat what he had heard.

One case involved a 2-year-old girl with a brain tumor, and “with some sensory integration impairment,” as Filar describes it. Unfamiliar with her environment and mistrustful of others, the little girl would scream and cry whenever anyone entered her room.

But because hers would be a protracted stay, the staff had to work diligently to mollify the child’s fears.

“Music therapy was the first window to the positive side of the hospital that she had,” Filar says. “She became more relaxed and could tolerate nurses and doctors coming in and checking on her,” she says.

As challenging as certain situations are, Filar says she still looks for small signs of advancements in each session. “We want to see some improvement or some sort of increased engagement or emotional expression, because in this setting, where people are coming and going, we often don’t know how often we’re going to be able to work with a child,” she says.

Stark agrees. “We’re always evaluating things like, Are we increasing the attention span? Are we decreasing frustration?”

Hospitals can be unnerving places for adults, but for children they can be terrifying, away from their parents in an unfamiliar environment and surrounded by strangers.

Filar, who also has a master’s in health psychology, understands the stress children are exposed to and tries to give them autonomy. “Kids, even at a very young age, start searching for a sense of control over their environment, and that’s why ‘no’ is one of the first words they learn,” she explains. “When they come to the hospital, a lot of that control is taken away. So we try to offer music as a choice and give them as much control as we can — what color instrument do you want to play, what song do you want to sing, do you want it to be happy or sad, fast or slow? They then gain more confidence within their environment.”

Although therapists sing or play music to their patients, inviting them to play an instrument is also part of the healing process. Filar says about 75 percent of the time a child will play percussion or some other instrument in a session. Stark recalls one boy who started out on drums in his treatment at the Community Music School and has now been accepted to Midtown’s Detroit School of Arts.

Both Filar and Stark understand the potency of music in an end-of-life situation.

“If a hospice patient is conscious, you’re able to do some type of life review or reminiscing,” Stark says. “If they’re semi-conscious it could be more of a focus on pain management. Other times, you just play music so you’re sort of breathing with the patient.”

The loss of an elderly person is sad enough, but it’s heartbreaking when a child nears the end. However, Filar says music can be a palliative to young patients and their families.

“We do songwriting with family members to try to create a type of legacy for the patient,” she says. “We also work a lot with siblings to give them a way to express themselves, to give them a voice in this difficult time.”

But whether therapy is used in the short term or long, with children or adults, Stark is convinced of music’s healing properties.

“Music engages us physically, emotionally, and cognitively,” she says. “The power of music is simply amazing in how it can impact lives.” 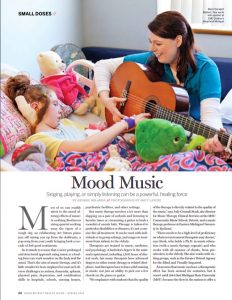 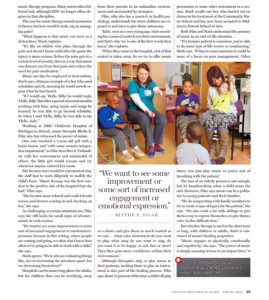